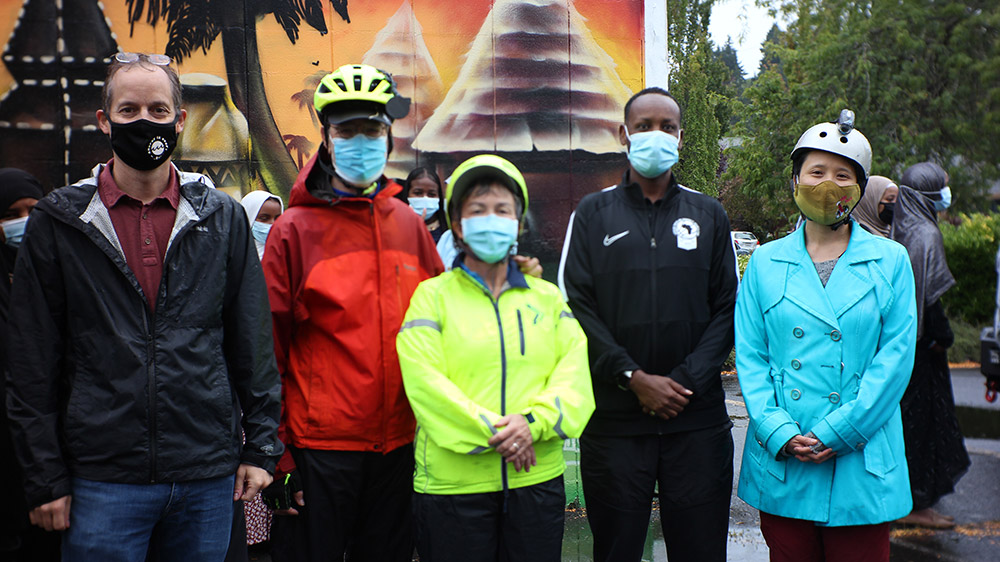 AYCO is on the cusp of building their new Dream Center which will further their mission of providing culturally specific youth services, civic engagement and health and disability services for East African immigrants and refugees in Portland. But they need more $2.5 million more in funding to make that dream of a permanent home a reality.

“We are dreaming big. We come from war torn countries, we come from a civil war, we come from refugee camp. We are calling home this place,” said Jamal Dar, founder and executive director of AYCO. “This is going to be a permanent AYCO office and space that we’ll be calling our home.” 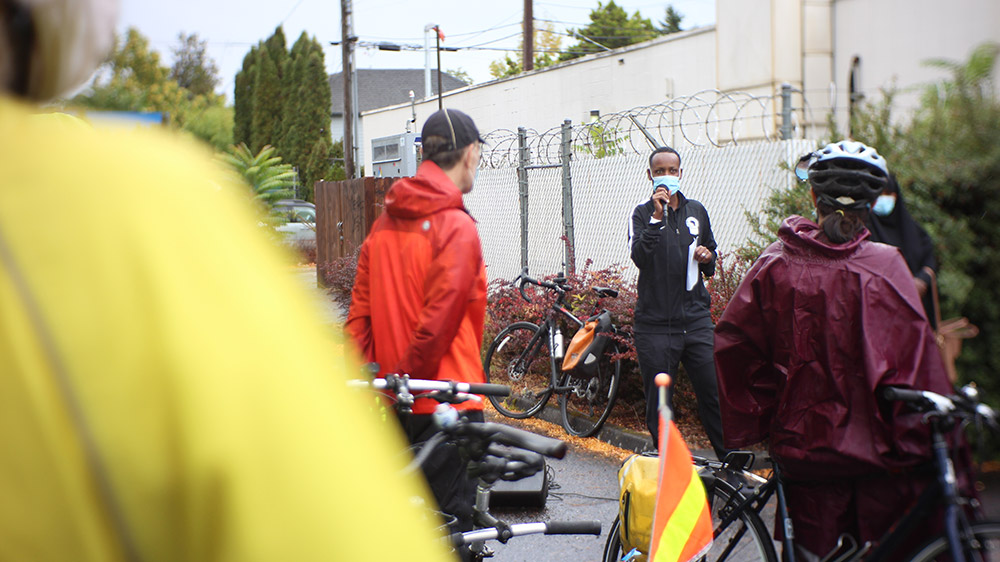 Backing this dream are Sen. Michael Dembrow and Rep. Khanh Pham, who have both helped secure some of the funding for the new center by allocating American Rescue Plan Act (ARPA) dollars for the project, which will include 250 affordable housing units.

“It’s raining. But the rain is going to bring fruit. We need the rain. We need hard times to get to good times,” Dembrow said. “We are helping to support this project by the housing project that’s been done in partnership with REACH. And the source of the funds for that are those federal funds, the ARPA funds you’ve probably heard about, the American Rescue Plan dollars. There were some dollars distributed to the different districts.”

Dembrow added that the reason why he supported AYCO is because their Dream Center is exactly the kind of thing ARPA is for: “to take communities that are hard hit and build for the future. So out of a pandemic can come a better future. I can’t think of a better cause to contribute to.”

Pham, Dembrow and Oregon’s House Majority Leader Barbara Smith Warner all paid a visit to AYCO as one of the stops for their Bike Town Hall. The representatives and constituents stood out in their bright and colorful windbreakers and helmets against the gray, wet skies as they took a three mile route around Portland’s Montavilla neighborhood. They discussed the future of safety improvements to Ne 82nd Ave, climate action, capital projects and local community programs, stopping at several spots along the way, including AYCO.

REACH Community Development discussed their partnership with AYCO and the future of the Dream Center, which still needs another $2.5 million in order to secure the 8,000 square foot community center. 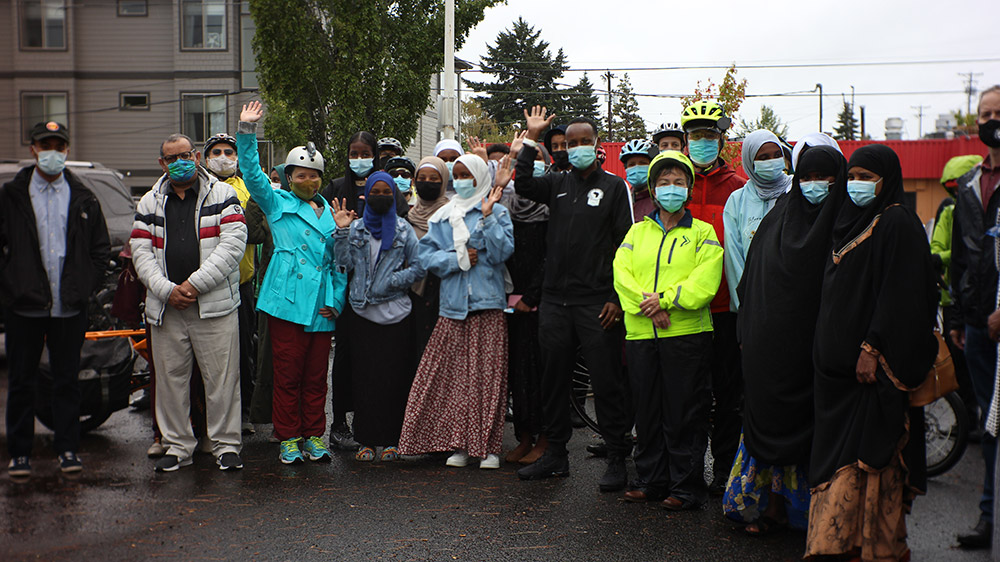 “Bottom line, we are grateful because AYCO selected us. I mean, we’re only here because we were selected by AYCO to develop this,” said Dan Valliere, CEO of REACH Community Development. “This is their vision, the dream center. But we’re going to integrate housing, affordable housing into it, supportive housing for people who have been homeless, other level of affordable housing for people who are just looking for, working people or other people, looking for lower rent.”

AYCO engages with over 18,000 Somali immigrants and refugees each year through their programs, helping individuals and families find

their footing in Portland after escaping civil wars and refugee camps. That represents a huge growth from when the nonprofit started over a decade ago, helping just six students by involving them in extra curricular sports.

Other speakers at the event included people who’ve been helped by AYCO over the years, such as Amran Goni, who gave a speech in Somali thanking the state legislators and their constituents for showing support of the organization.

Faduma Abdi, also speaking Somali, said AYCO helped some of her sons with disabilities. Two of her nine children were able to graduate high school, thanks to AYCO’s help, she said. In addition, those two who graduated are now staff at AYCO, which she said she’s grateful for.

Many of the staff at AYCO are able to provide culturally-specific services by having the lived experiences of those who they serve, often coming from a similar background. 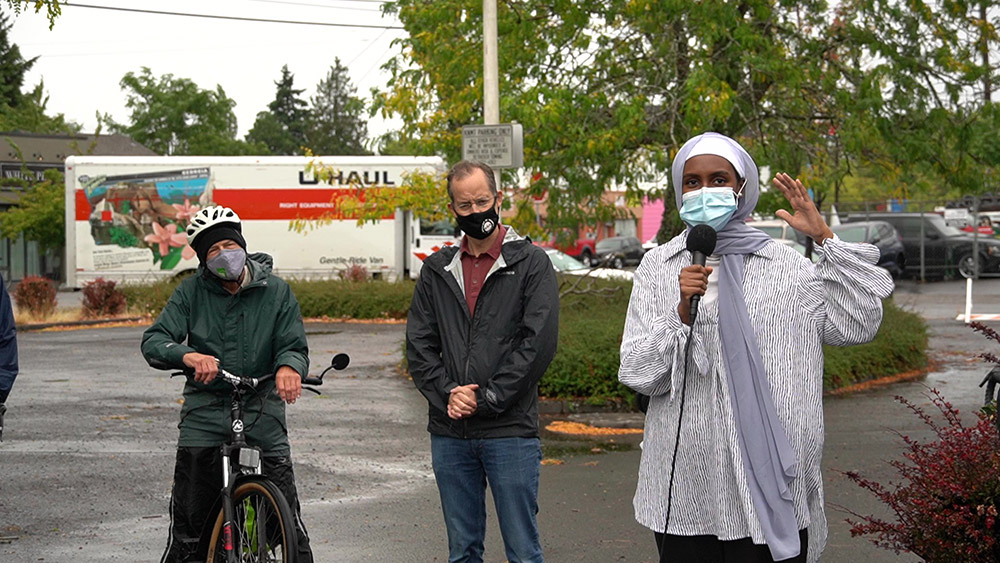 Honda Farah (right), an AYCO Crime Victim Advocate, says kids she once mentored as a volunteer at AYCO are now staff there. (Photo credit: Danny Peterson)

“I’ve been a part of this for the past, almost 15 years,” said Mohammed Yahya, AYCO Crime Victim Advocate. “So I’ve been with AYCO through the times. I’ve seen the small, little organization, maybe a couple of us playing basketball after school, and now it’s turned into something huge and amazing.”

Hinda Farah, another AYCO Crime Victim Advocate, added that kids she once mentored years ago as a volunteer with AYCO are now in staff positions running various programs.

“It’s been amazing to see that progression. This Dream Center that we’re working towards is just amazing and we’re so excited to have the opportunity to have a permanent home for AYCO,” Farah said.

Back in January of this year, AYCO moved into their current location on Ne 74th and Glisan thanks to a partnership with landowner Metro. Before then, they were sited near Se 122nd Avenue. The building, previously owned by Trinity Broadcast Network, will eventually be replaced with a mixed use facility. AYCO will occupy the first floor of the new development, with affordable housing units on the floors above.

The dream is to create a hub for immigrants and refugees of the Pan-African Diaspora and communities of color to feel at home, spur economic development, curb displacement and provide protective factors against systemic inequities.

You can give your support for the project through AYCO’s Donate Now page.

Also be sure to join AYCO for its Dream Center grand reopening event in October.